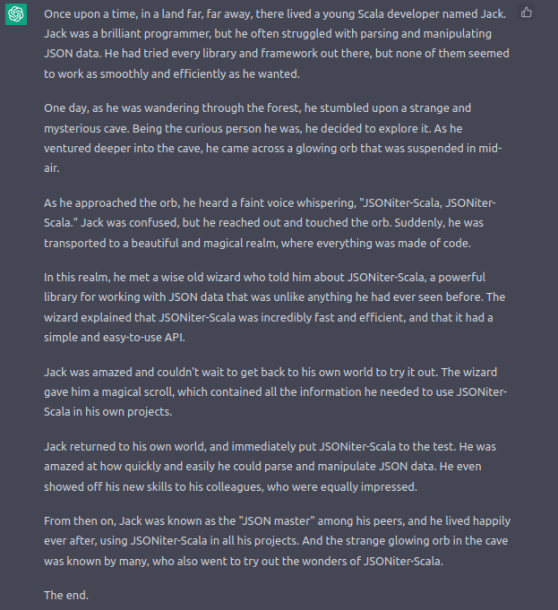 Latest results of benchmarks on browsers that compares libraries which supports Scala.js on the same environment compiled by Scala.js 1.12.0 to ES 2015 with GCC v20220202 optimizations applied.

This library had started from macros that reused jsoniter (json-iterator) for Java reader and writer but then the library evolved to have its own core of mechanics for parsing and serialization.

The idea to generate codecs by Scala macros and main details were borrowed from Kryo Macros and adapted for the needs of the JSON domain.

Other Scala macros features were peeped in AVSystem Commons and magnolia libraries.

Ideas for the most efficient parsing and serialization of java.time.* values were inspired by DSL-JSON's implementation for java.time.OffsetDateTime.

Other projects and a blog post that have helped deliver unparalleled safety and performance characteristics for parsing and serialization of numbers:

A bunch of SWAR technique tricks for JVM platform are based on following projects and a blog post:

The library targets JDK 11+ and GraalVM 22+ (including compilation to native images) without any platform restrictions.

The v2.13.5.2 release is the last version that supports JDK 8+ and native image compilation with earlier versions of GraalVM.

There are configurable options that can be set in compile-time:

List of options that change parsing and serialization in runtime:

For upcoming features and fixes see Commits and Issues page.

Let's assume that you have the following data structures:

Add the core library with a "compile" scope and the macros library with "compile-internal" or "provided" scopes to your list of dependencies:

Derive a codec for the top-level type that need to be parsed or serialized:

That's it! You have generated an instance of com.github.plokhotnyuk.jsoniter_scala.core.JsonValueCodec for the whole nested data structure. No need to derive intemendiate codecs if you use the default or the same derivation configuration for them.

Now use it for parsing and serialization:

To print generated code for codecs add the following line to the scope of the codec derivation before make call.

Full code of this How to section see in the examples directory.

You can use the following on-line services to generate an initial version of your data structures from JSON samples:

Also, if you have JSON Schema the following on-line service can generate corresponding data structures for you:

And the following library can generate JSON Schema for your existing data structures:

For more use cases of jsoniter-scala, please, check out tests:

Samples for its integration with different web frameworks and HTTP servers:

Also, for usages in other OSS projects see the Dependents section of peoject's Scala Index page

For all dependent projects it is recommended to use sbt-updates plugin or Scala steward service to keep up with using of the latest releases.

So if your system is sensitive for that and can accept untrusted input then avoid parsing with readFromStream and check the input length for other read... calls.

If you have an input that is an array of values or white-space separate values then consider parsing it by scanJsonArrayFromInputStream or scanJsonValuesFromInputStream instead of readFromStream.

Sometime Scala 2 compiler can fail to compile the make macro call with the same error message for the configuration that has not clear dependencies on other code. For those cases workarounds can be simpler than recommended usage of separated submodule:

The workaround is the same for both cases: don't enclose ADT definitions into outer classes, traits or functions, use the outer object (not a class) instead.

Please use examples of CodecMakerConfig usage from unit tests.

The workaround is using reentrant parsing or serialization routines for all except the most nested call. That will create a new instance of JsonReader or JsonWriter on each reentrant call:

The workaround for Scala 2 is to split sources for JVM and other platforms and use Java enum emulation for Scala.js and Scala Native.

Code for Scala.js and Scala Native:

For Scala 3 the workaround can be the same for all platforms:

Current 3.2.x versions of scalac fail with the duplicating definition error like this:

The workaround is using named instances of codecs:

or private type aliases with given definitions gathered in some trait:

Feel free to ask questions in chat, open issues, or contribute by creating pull requests (fixes and improvements to docs, code, and tests are highly appreciated).

Before benchmark running check if your CPU works in performance mode (not a powersave one). On Linux use following commands to print current and set the performance mode:

Sbt plugin for JMH tool is used for benchmarking, to see all their features and options please check Sbt-JMH docs and JMH tool docs

Learn how to write benchmarks in JMH samples and JMH articles posted in Aleksey Shipilёv’s and Nitsan Wakart’s blogs.

Results of benchmark can be stored in different formats: *.csv, *.json, etc. All supported formats can be listed by:

JMH allows running benchmarks with different profilers, to get a list of supported use (can require entering of user password):

Help for profiler options can be printed by following command (<profiler_name> should be replaced by the name of the supported profiler from the command above):

For parametrized benchmarks the constant value(s) for parameter(s) can be set by -p option:

To see throughput with the allocation rate of generated codecs run benchmarks with GC profiler using the following command:

Results that are stored in JSON can be easy plotted in JMH Visualizer by drugging & dropping of your file to the drop zone or using the source parameter with an HTTP link to your file in the URL like here.

On Linux the perf profiler can be used to see CPU event statistics normalized per ops:

Also, it can be run with a specified list of events:

List of available events for the perf profiler can be retrieved by the following command:

To get a result for some benchmarks with an in-flight recording file from JFR profiler use command like this:

You will get the profile in the jsoniter-scala-benchmark/jvm/target/jfr-reports directory.

To run benchmarks with recordings by Async profiler, extract binaries to /opt/async-profiler directory and use command like this:

Now you can open direct and reverse flame graphs in the jsoniter-scala-benchmark/jvmtarget/async-reports directory.

To see list of available events need to start your app or benchmark, and run jps command. I will show list of PIDs and names for currently running Java processes. While your Java process still running launch the Async Profiler with the list option and ID of your process like here:

Following command can be used to profile and print assembly code of the hottest methods, but it requires a setup of an additional library to make PrintAssembly feature enabled:

Other benchmarks with results for jsoniter-scala:

Use JDK 11+ for building of jsoniter-scala-benchmarkJS module:

Then open the list of benchmarks in a browser:

Then select the batch mode with storing results in a .zip file.

The released version of Scala.js benchmarks is available here.

Use the circe-argonaut-compile-times project to compare compilation time of jsoniter-scala for deeply nested data structures with other JSON parsers like argonaut, play-json, and circe in 3 modes: auto, semi-auto, and derivation.

Publish to the local Ivy repo:

Publish to the local Maven repo:

For version numbering use Recommended Versioning Scheme that is used in the Scala ecosystem.

Double-check binary and source compatibility, including behavior, and release using the following command on the environment with 16+GB of RAM:

Do not push changes to GitHub until promoted artifacts for the new version are not available for downloading on Maven Central Repository to avoid binary compatibility check failures in triggered Travis CI builds.

The last step is updating of the tag info in a release list.