Status: Not maintained: this project morphed into the DSL Wiki.

Embeddable interactive scripting pad for scala. It is available over telnet, http and swing.

Note this project is not maintained anymore. Scala now supports JSR 223 and the server/hosting and other DCI aspects of this project have been rolled up in other projects, notably the scala DSL wiki engine. Even though content assist and other features are cool, it's not easy maintaining this across scala compiler versions and sbt/play/production settings and classloaders etc.

Notably, this project made scala server scripting available via not only http/web but also a simple telnet session, including content-assist!

Tryscala.com was an online scripting/fiddle for scala, with content assist, short URL fiddles (based on), forking etc.

It was retired in 2017, as https://scalafiddle.io/ seems good enough. Many of its features were morphed into theDSL Wiki. 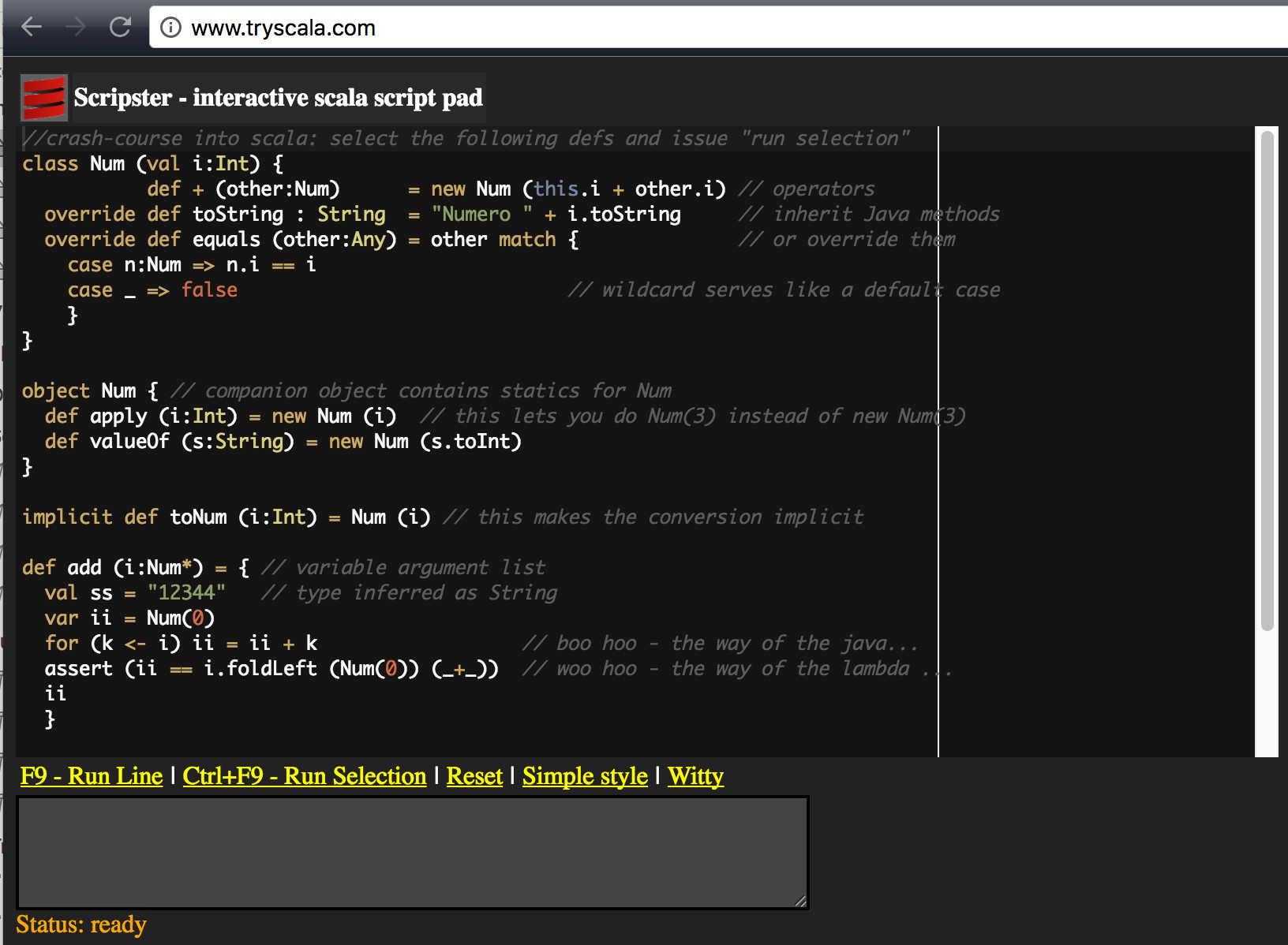 So anyone can interact with a running application, having access to all or some of the application's objects.

What is so special about the scrispter? It has full syntax coloring and content assist, for starters! It can be embedded into any application and shares the same port for telnet as well as web access...

In the sbt Project file for your project (project/build/Project.scala or project/Build.scala), add the dependency:

If you want to build it, see building instructions.

If instead you just want to run it or add it to your runnables as a single Jar file, use the latest distribution jar from the github downloads and use it in the classpath.

Make sure that, if you use a SNAPSHOT version, the snapshots repository is added to sbt, as in project/Build.scala :

For an example, see usage in my snakked project. Good luck!

May add some more scripting languages in the future but otherwise I don't think this will evolve.

Features for when I (or you can) find the time:

Put some objects in a context and run a simple scala script:

Create and add variables to the context, to pass to the next script:

There's only basic policy-file based security - need to add some, especially per-script permissions. The simplest way I see to do that is to create a "client" package for all script code and grant it only specific permissions...

There's no mapping to a "normal" servlet. Jetty support etc. There is however a ScripsterService class that could serve as the basis for that. I might soon entertain moving this to play.

The simplest application will define its domain model, a few contexts and just give users access to those objects in the respective contexts. That's Scripster for you!

Users are guided through what they can do with the domain objects by the available content assist...

You may want to create UIs to nice-ify the user interaction, but, once you have your domains and contexts, with Scripster, your basic app is up and running in less than 5 minutes.