This project is only maintained for Scala 2.x. No new features are developed, but bug fix releases will still be made available. Dotty/Scala 3 has built-in type lambda syntax and kind-projector compatible syntax.

"But I don't want to go among mad people," Alice remarked.

One piece of Scala syntactic noise that often trips people up is the use of type projections to implement anonymous, partially-applied types. For example:

Many people have wished for a better way to do this.

The goal of this plugin is to add a syntax for type lambdas. We do this by rewriting syntactically valid programs into new programs, letting us seem to add new keywords to the language. This is achieved through a compiler plugin performing an (un-typed) tree transformation.

One problem with this approach is that it changes the meaning of (potentially) valid programs. In practice this means that you must avoid defining the following identifiers:

If you find yourself using lots of type lambdas, and you don't mind reserving those identifiers, then this compiler plugin is for you!

Note: as of version 0.11.0 the plugin is published against the full Scala version (see #15)

To use this plugin in your own projects, add the following lines to your build.sbt file:

Note: for multi-project builds - put addCompilerPlugin clause into settings section for each sub-project.

For mill projects, add the plugin to the scalacPluginIvyDep Note the triple colons (:::) to ensure it uses the full scala version.

Versions of the plugin earlier than 0.10.0 were released under a different organization (org.spire-math).

The simplest syntax to use is the inline syntax. This syntax resembles Scala's use of underscores to define anonymous functions like _ + _.

Since underscore is used for existential types in Scala (and it is probably too late to change this syntax), we use * for the same purpose. We also use +* and -* to handle covariant and contravariant types parameters.

Here are a few examples:

As you can see, this syntax works when each type parameter in the type lambda is only used in the body once, and in the same order. For more complex type lambda expressions, you will need to use the function syntax.

Since version 0.13.0 kind-projector adds an option to use underscore symbol _ instead of * to define anonymous type lambdas. The syntax roughly follows the proposed new syntax for wildcards and placeholders for Scala 3.2+ and is designed to allow cross-compilation of libraries between Scala 2 and Scala 3 while using the new Scala 3 syntax for both versions.

To enable this mode, add -P:kind-projector:underscore-placeholders to your scalac command-line. In sbt you may do this as follows:

This mode is designed to be used with scalac versions 2.12.14+ and 2.13.6+, these versions add an the ability to use ? as the existential type wildcard (scala/scala#9560), allowing to repurpose the underscore without losing the ability to write existential types. It is not advised that you use this mode with older versions of scalac or without -Xsource:3 flag, since you will lose the underscore syntax entirely.

Here are a few examples:

The more powerful syntax to use is the function syntax. This syntax resembles anonymous functions like x => x + 1 or (x, y) => x + y. In the case of type lambdas, we wrap the entire function type in a Lambda or λ type. Both names are equivalent: the former may be easier to type or say, and the latter is less verbose.

Here are some examples:

Since types like (+A, +B) => Either[A, B] are not syntactically valid, we provide two alternate methods to specify variance when using function syntax:

(Note that unlike names like *, + and - do not have to be reserved. They will only be interpreted this way when used in parameters to Lambda[...] types, which should never conflict with other usage.)

Here are some examples with variance:

The function syntax also supports higher-kinded types as type parameters. The syntax overloads the existential syntax in this case (since the type parameters to a type lambda should never contain an existential).

Here are a few examples with higher-kinded types:

The function syntax with backtick type parameters is the most expressive syntax kind-projector supports. The other syntaxes are easier to read at the cost of being unable to express certain (hopefully rare) type lambdas.

The inline syntax is the tersest and is often preferable when possible. However, there are some type lambdas which it cannot express.

For example, imagine that we have trait Functor[F[_]].

However, * always binds at the tightest level, meaning that List[*] is interpreted as type X[a] = List[a], and that Future[List[*]] is invalid.

In these cases you should prefer the lambda syntax, which would be written as:

Other types which cannot be written correctly using inline syntax are:

This section shows the exact code produced for a few type lambda expressions.

As you can see, names like Λ$ and α$ are forbidden because they might conflict with names the plugin generates.

If you dislike these unicode names, pass -Dkp:genAsciiNames=true to scalac to use munged ASCII names. This will use L_kp in place of Λ$, X_kp0$ in place of α$, and so on.

Scala does not have built-in syntax or types for anonymous function values which are polymorphic (i.e. which can be parameterized with types). To illustrate that consider both of these methods:

Having implemented these methods, we can see that the second just generalizes the first to work with any type: the function bodies are identical. We'd like to be able to rewrite each of these methods as a function value, but we can only represent the first method (firstInt) this way:

(One reason to want to do this rewrite is that we might have a method like .map which we'd like to pass an anonymous function value.)

Several libraries define their own polymorphic function types, such as the following polymorphic version of Function1 (which we can use to implement firstGeneric0):

It's nice that PolyFunction1 enables us to express polymorphic function values, but at the level of syntax it's not clear that we've saved much over defining a polymorphic method (i.e. firstGeneric).

Since 0.9.0, Kind-projector provides a value-level rewrite to fix this issue and make polymorphic functions (and other types that share their general shape) easier to work with:

Either λ or Lambda can be used (in a value position) to trigger this rewrite. By default, the rewrite assumes that the "target method" to define is called apply (as in the previous example), but a different method can be selected via an explicit call.

In the following example we are using the polymorphic lambda syntax to define a run method on an instance of the PF trait:

It's possible to nest this syntax. Here's an example taken from the wild of using nested polymorphic lambdas to remove boilerplate:

Kind-projector's support for type lambdas operates at the type level (in type positions), whereas this feature operates at the value level (in value positions). To avoid reserving too many names the λ and Lambda names were overloaded to do both (mirroring the relationship between types and their companion objects).

Here are some examples of expressions, along with whether the lambda symbol involved represents a type (traditional type lambda) or a value (polymorphic lambda):

One pattern you might notice is that when λ occurs immediately within [] it is referring to a type lambda (since [] signals a type application), whereas when it occurs after = or within () it usually refers to a polymorphic lambda, since those tokens usually signal a value. (The () syntax for tuple and function types is an exception to this pattern.)

Polymorphic lambdas under the hood

What follows are the gory details of the polymorphic lambda rewrite.

Polymorphic lambdas are a syntactic transformation that occurs just after parsing (before name resolution or typechecking). Your code will be typechecked after the rewrite.

Written in its most explicit form, a polymorphic lambda looks like this:

(The names A and x are used for clarity –- in practice unique names will be used for both.)

This rewrite requires that the following are true:

The entire λ-expression will be rewritten immediately after parsing (and before name resolution or typechecking). If any of these constraints are not met, then a compiler error will occur during a later phase (likely type-checking).

Here are some polymorphic lambdas along with the corresponding code after the rewrite:

Unfortunately the type errors produced by invalid polymorphic lambdas are likely to be difficult to read. This is an unavoidable consequence of doing this transformation at the syntactic level.

You can build kind-projector using SBT 0.13.0 or newer.

Here are some useful targets:

You can use the plugin with scalac by specifying it on the command-line. For instance:

This project must use full cross-versioning and thus needs to be republished for each new release of Scala, but if the code doesn't change, we prefer not to ripple downstream with a version bump. Thus, we typically republish from a tag.

You can also run the above steps in CI by manually triggering the workflow in backpublish.yml. To do so, navigate to the Actions tab, select the Back-Publish workflow from the left side-bar, and click Run workflow to access a drop-down menu to run the workflow. 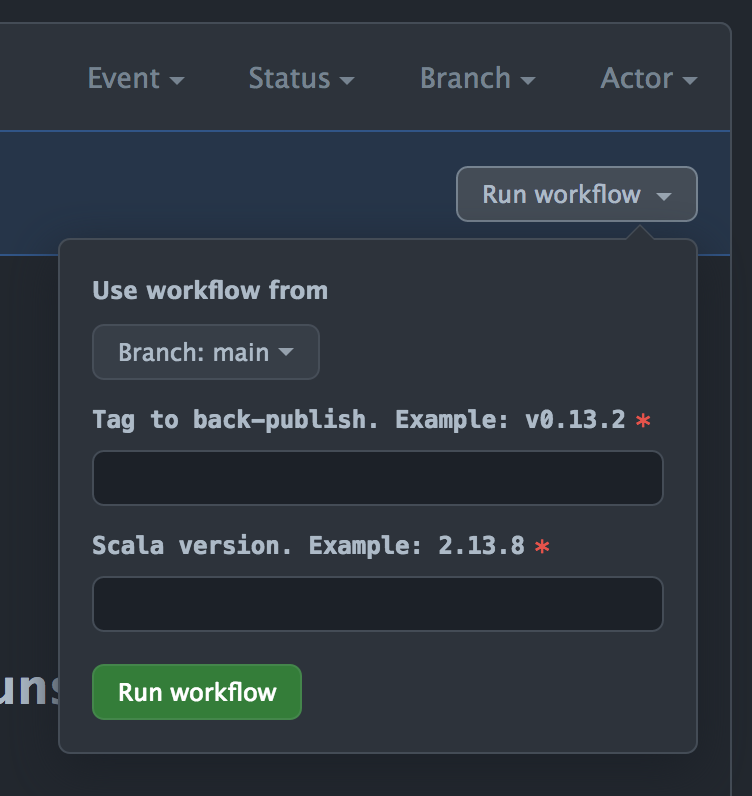 Here's an example that highlights this issue:

There have been suggestions for better syntax, like [A, B]Either[B, A] or [A, B] => Either[B, A] instead of Lambda[(A, B) => Either[B, A]]. Unfortunately this would actually require modifying the parser (i.e. the language itself) which is outside the scope of this project (at least, until there is an earlier compiler phase to plug into).

Others have noted that it would be nicer to be able to use _ for types the way we do for values, so that we could use Either[Int, _] to define a type lambda the way we use 3 + _ to define a function. Unfortunately, it's probably too late to modify the meaning of _, which is why we chose to use * instead.

As of 0.5.3, kind-projector should be able to support any type lambda that can be expressed via type projections, at least using the function syntax. If you come across a type for which kind-projector lacks a syntax, please report it.

Kind projector is an unusual compiler plugin in that it runs before the typer phase. This means that the rewrites and renaming we are doing are relatively fragile, and the author disclaims all warranty or liability of any kind.

(That said, there are currently no known bugs.)

If you are using kind-projector in one of your projects, please feel free to get in touch to report problems (or a lack of problems)!

People are expected to follow the Scala Code of Conduct when discussing Kind-projector on GitHub or other venues.

The project's current maintainers are:

All code is available to you under the MIT license, available at http://opensource.org/licenses/mit-license.php and also in the COPYING file.