TypeChef is a research project with the goal of analyzing ifdef variability in C code with the goal of finding variability-induced bugs in large-scale real-world systems, such as the Linux kernel with several thousand features (or configuration options).

TypeChef was started with the goal of building a type system for C code with compile-time configurations. TypeChef was originally short for Type Checking Ifdef Variability. Over time it has grown into an infrastructure of all kinds of analyses. In all cases, the goal is to detect errors in all possible feature combinations, without resorting to a brute-force approach. It also evolved into a basis for a sound transformation and refactoring engine (Hercules and Morpheus) and as an import mechanism for mbeddr. 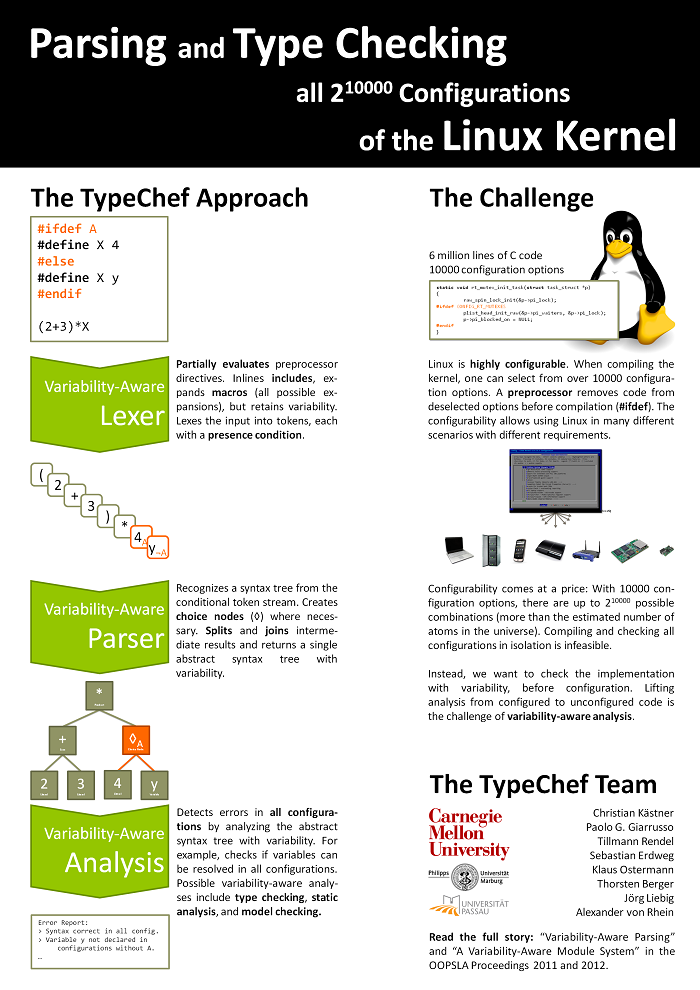 You can download a .jar file including all necessary libraries TypeChef.jar. Run as usual

TypeChef is also available as a maven repository. With sbt you can include TypeChef with the following line:

To build TypeChef from source, we use sbt. Install git and download and compile the code as follows

Due to library dependencies, setting up the TypeChef classpath can be difficult. There are two convenient mechanisms: Use sbt assembly to build a single jar file. Alternatively, call sbt mkrun to create a script typechef.sh that sets a correct classpath.

Most functionality of TypeChef is accessible through parameters of the main de.fosd.typechef.Frontend class. Call TypeChef with --help to see a list of configuration parameters. See also Parameter.txt. You will need to set up system include paths with -I and a header file with the compiler's macro definitions with -h (generate, for example, with echo - | gcc -dM - -E -std=gnu99 for gcc). Have a look at existing projects using TypeChef or contact us in case of questions.

For development, we use IntelliJ Idea. In never versions, you can simply import the project as an sbt project. In general avoid to set the classpath in IDEs manually, but automate this step through sbt.

The implementation of the data-flow analysis has been evaluated in two case studies (BusyBox and Linux) and the result of this evaluation is available from http://fosd.net/vaa

The setups for running TypeChef on these projects are available as separate github projects, for example:

The project was only possible with fruitful collaboration of many researchers, included, but not limited to:

The variability-aware lexer is implemented on top of jcpp, an implementation of the C preprocessor in Java. An alternative based on xtc/superc is included experimentally as well.

For reasoning about propositional formulas, we use the SAT solver sat4j.

The GNU C parser is based on an ANTLR grammar for GNU C.

The Java parser is based on a grammar that can be traced back to the Java 1.5 grammar in the JavaCC repository.

For convenience, we include a binary of sbt in the repository.

This work was supported in part by the European Research Council, grant #203099 and the National Science Foundation #.

Fork the project, write bug reports, contact us, .... We are open for collaborations and extensions and other scenarios.

An in-depth discussion of the parsing approach and our experience with parsing Linux was published at OOPSLA 2011:

In the context of a variability-aware module system, we discussed type checking and linker checks on the example of Busybox, published at OOPSLA 2012:

A description of how we scaled type system and data-flow analysis and a performance comparison with sampling strategies can be found here:

A large scale analysis of configuration constraints in Linux, Busybox, eCOS, and uClibc using TypeChef was presented at ICSE 2014 and subsequently published in TSE:

The underlying concepts of building variational data structures and programming with variational lists, maps, and sets were discussed in an Onward 2014 paper:

A sound refactoring engine based on TypeChef was presented at ICSE 2015:

A more detailed discussion of the variability-aware lexer (or partial preprocessor) was presented at VaMoS 2011:

A discussion of potential integer vulnerabilities across compile-time configurations was discussed in a technical report:

A simple variability-aware interpreter for executing test cases was build on top of TypeChef and published at FOSD 2012. A subsequent extension of this work for PHP was published at ICSE 2014:

An approach to simplify presence conditions, integrated into TypeChef, was presented at ICSE 2015:

TypeChef supported the infrastructure for work on analyzing HTML and JavaScript within PHP code, published at FSE 2014, FSE 2015 and a tool demo:

For an overview of variability-aware analysis in general, please refer to the a technical report on the following webpage http://fosd.net/spl-strategies and the following reports:

Finally, an early overview of the project with a very preliminary implementation (now terribly outdated and superseeded by the papers above) was published at

TypeChef is published as open source under LGPL 3.0. See LICENSE.